There's Music Everywhere You Go - And There's a Reason 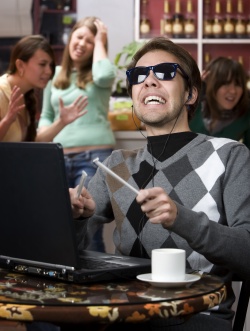 A few years back, the Sunday Times in England asked 1,500 people about the biggest irritations in their lives.

Tops on the list was junk mail, followed by slow drivers, people gabbing away on cell phones, and too few checkout lines at the supermarket.

Also on the list and cited by 17% of people - about 1 in 6 - was piped-in music in stores and restaurants.

Most of the time, we don't notice the canned tunes filling the air in the grocery store or mall unless they're too loud, or unless a favorite - or loathed - selection comes on. It's white noise, filler, a sort of acoustic wallpaper.

But that doesn't mean that we aren't affected by it.

In a famous study from 1999, researchers played French music in a supermarket one day, German music the next, alternating for two weeks. When French music was on, wines from France outsold those from Germany. On German music days, the stuff from Deutschland sold more. (When asked, customers said the music played no role in their buying decisions.)

It's probably no surprise then that the past decades have seen businesses shift from the safe, vanilla sounds of elevator music to more "foreground music" - pop, techno, new wave, classic rock - genres that actually elicit an emotional response.

The acoustic wallpaper has been peeled off the background and placed front and center.

Go to the gym, a restaurant, a bar, coffee shop, the mall, a salon, even a hospital, and music will be playing. (We hear an average of 76 minutes of "unchosen" music a day, according to a BBC survey.)

Some places let the employees pick the selections; others simply turn on the radio (although, by law, business owners are obligated to pay royalties for music played in their stores). Larger stores and chains use music services to help them develop "full sensory branding."

The folks programming the songs say music is as important as the sign, the logo and the decor.

Using music's tempo, volume, intensity, lyrics and emotional connections, businesses not only can set a tone and create a vibe, they can energize customers or make them relax; they can increase "dwell time" or goose diners to turn over their restaurant tables quicker. All the while, we the consumers don't seem to notice.

But playing Lady Gaga in your bar or boutique also has its risks, says author Joseph Lanza.

"As soon as you start playing foreground music, you are imposing particular musical styles. You're putting yourself into a much more compromising situation," he says. "Not everyone likes classic rock, not everyone likes hip-hop, not everybody likes classical, so when you make a decision to put in foreground music, you're actually running the risk of alienating more people."

Lanza remembers going into a store with a friend in New York City and getting blasted with loud music.

Lanza, an admitted fan of old-fashioned dentist-office "elevator music," says the shift away from background music began in the mid-1980s, when music providers began offering foreground music packages and touting the marketing and branding potential.

"And, what I'm suspecting, is more and more people are getting annoyed."

Annoying or not, a store's music can create a connection and add to a customer's experience. If it's too loud or aggravating, you're probably not in the business's target audience.

And if you don't like Lady Gaga, you need to at least get used to her. She is among the artists with the most consistent presence on store playlists, says Morley. The list includes Rihanna, Katy Perry, Ke$ha and even old reliables like the Beatles.

Lanza longs for a return to the days when we'd hear less-obtrusive string-orchestra versions of "Poker Face" or "California Gurls." Instead, our ears are at the mercy of store owners.

"It really depends on the taste of the proprietor now," he says. "It's a new kind of tyranny."

(This article was written by John Campanelli of The Plain Dealer and featured on Cleveland.com.)

Read 6500 times Last modified on Thursday, 19 May 2016 15:54
Tweet
Published in Research
More in this category: In-Store Video Survey Results »
back to top